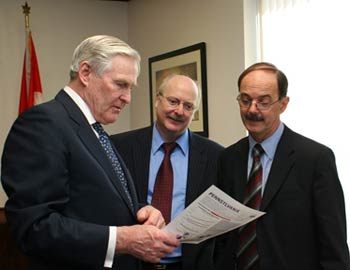 It was all smiles and handshakes at the Coast Guard Headquarters for the Delaware River and Bay as a Canadian ICT company and an American trade association signed a contract to work together to make seaports safer.

Canada’s Ambassador to the United States, Michael Wilson, was present for the ceremony, and called the partnership yet another example of how Canada and the United States are working together to better secure North America.

Nicom IT Solutions of Halifax, Nova Scotia won a major contract to redevelop the port logistics system for the Maritime Exchange for the Delaware River and Bay, an organization based in Philadelphia.

The new system, called “Maritime On-Line” will consist of a number of software applications to capture and report on vessel movement, cargo manifests, Customs and Border requirements, and advanced arrival/departure schedules. This will be a web-based electronic commerce system that will be used by a large number of organizations who form part of the Maritime Exchange.

Pat d’Entremont, Nicom Partner in charge of new business development sees this as central to Nicom’s growth plans. “This event is pivotal in our corporate history as it represents our first significant international project, and the largest project we have ever undertaken”, says d’Entremont, “Where better to start than in the United States of America”.

Nicom credits the success, in part, to the Canadian Consulate of Philadelphia in helping advance the agreement. As well as developing the application, Nicom will be working with Canada’s Trade Commissioner Service towards marketing this product, once completed, to other ports throughout the world.

Nicom has already developed software systems for other seaports, including the Saint John Port Authority, the Atlantic Pilotage Authority, and the Halifax Port Authority. The system they developed for Halifax won an award at the American Association of Port Authorities, which is how they were introduced to the Maritime Exchange.

The Maritime Exchange for the Delaware River and Bay represents the interests of federally regulated ports, vessels, and related businesses in Pennsylvania, New Jersey and Delaware. As a not-for-profit trade association the Exchange’s role is to promote commerce, protect trade, and enhance navigation safety.

The Exchange continues to promote and encourage commerce on the Delaware River and Bay by fully utilizing today’s modern technologies. “We have always been conscious of the changing needs of our members and the port community,” remarked Dennis Rochford, President of the Maritime Exchange. “Our work with Nicom will result in significant improvements to a system used by both the private and public sector to facilitate trade, improve maritime domain awareness and enhance navigational safety.”

“Canadians and Americans are in this together. We make things together. Keeping North America safe is our commitment. Nicom IT Solutions is typical of the many Canadian firms that have developed innovative technologies to take on the ever-evolving security threat”, said Michael Wilson, Canadian Ambassador to the United States.